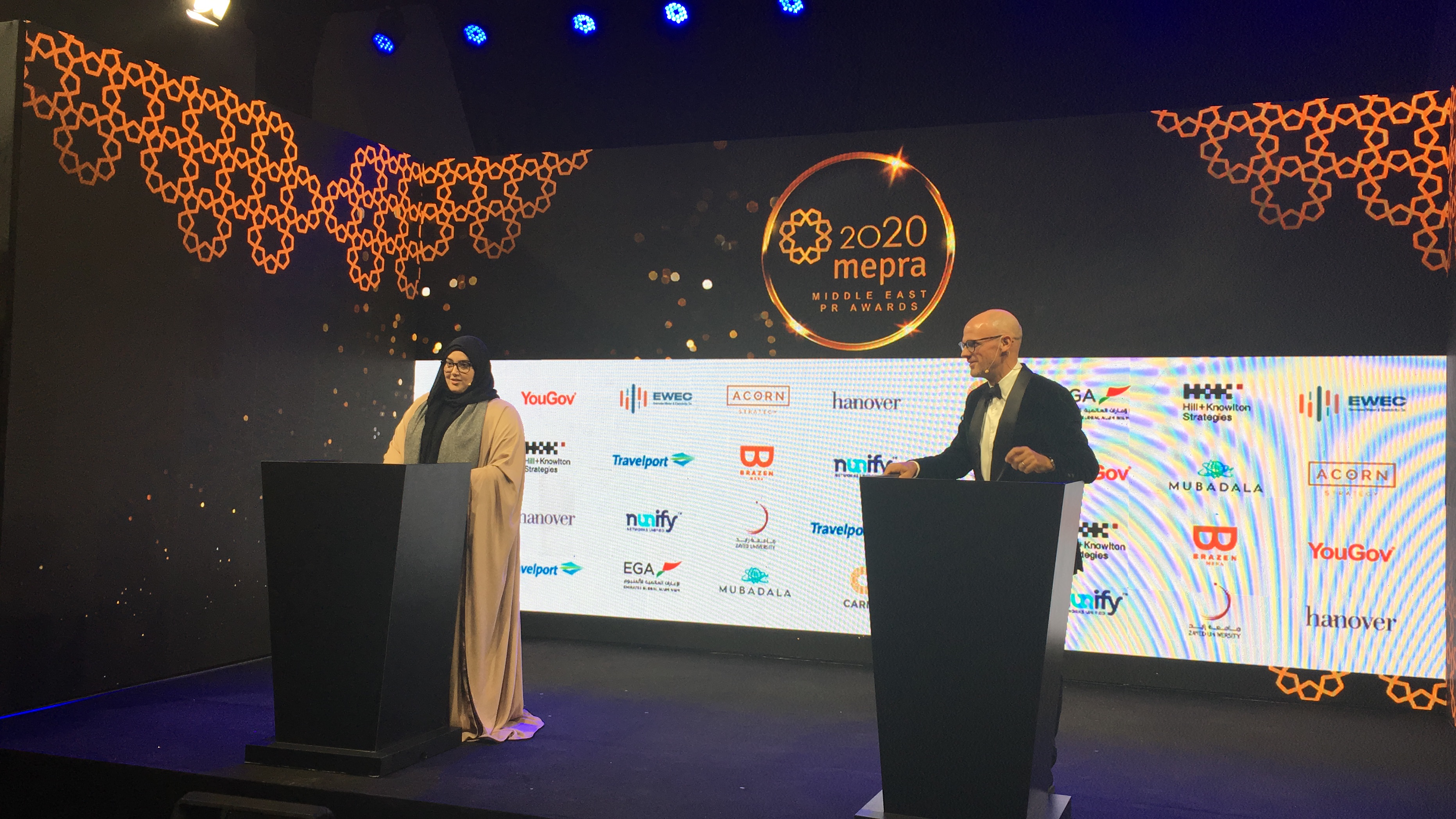 MEPRA hosted its largest-ever Awards edition last night, held virtually for the first time. More than 700 virtual guests tuned in, as 80 agencies and in-house communication team finalists battled it out to win across a record 53 categories. The Awards ceremony, which was hosted by MEPRA Chair Jonty Summers and Executive Board Member Souad AlSerkal, saw markettiers MENA take home Small Agency of the Year and Hill+Knowlton Strategies win the coveted title of Large Agency of the Year.

For the second year running, the Small In-House Team of the Year went to Standard Chartered Bank and Large In-House Team of the Year was awarded to first-time entrant Majid Al Futtaim. A big winner for the night was Hill+Knowlton Strategies, who not only scored Large Agency of the Year but also collected more awards than any other organisation, with an impressive 37 wins. As with previous years, there was only a small margin between the winner and second place for Large Agency of the Year, with Hill+Knowlton Strategies scoring 80.6% and Weber Shandwick MENAT just behind them on 78.5%. Gambit Communications made an impressive debut into the MEPRA Awards, coming in second for Small Agency of the Year and missing out by only 3%.

The Mohammed bin Rashid Al Maktoum Global Initiatives, together with MullenLowe MENA and markettiers MENA won five Gold Awards for their entry; The World’s Tallest Donation Box, which was the most wins received for a campaign.

Omar Batterjee from Hill+Knowlton Strategies became the first Saudi National to win MEPRA’s Young Communicator of the Year for an Agency, following a two-round selection process including a written entry plus a presentation and interview with a MEPRA Awards judging panel. Amneh Alkhatib from Siemens Energy was selected as the Young Communicators of the Year for In-house after wowing judges with her impactful storytelling during her presentation. Both winners will be invited to join the MEPRA Youth Board, which helps MEPRA shape the strategy for engaging young communicators in the region.

The 2020 Chairman’s award was awarded to recently retired Ogilvy MENA Regional Director, Saada Hammad, for her outstanding contribution to the industry.

This year marks the 12th edition of the MEPRA Awards, the communications industry’s most prestigious event, which celebrates and recognises the most creative and impactful practitioners in the Middle East. The annual Awards is open to all Middle East based agencies, corporates, government organisations and non-profits working in the communications profession.

"Every year the MEPRA Awards continues to show the dynamism, creativity, and discipline of the public relations industry in the region. This year‘s new category showcasing creativity in the face of the COVID-19 situation Is a perfect illustration of these qualities. MEPRA also exists to promote and support the development of the next generation of regional talent, and it was heartening to see the largest ever number of entrants in our Young Communicator of the Year categories this year. The future looks in good hands.”

Entries were assessed by a panel of more than 50 regional and international industry experts to select the 2020 finalists and winners. The judging process was also reviewed by CARMA CEO Richard Bagnall, who served as an independent adjudicator. This year, shortlisted entries were limited to 10 per category. For categories, which received a larger collection of entries, only the top 10 were shortlisted, even if the submission reached over the 70% scoring threshold.

For the first time, MEPRA has developed an online showcase, which includes a preview of all winners in each category. To view the full list of winners and the online showcase, visit www.mepra.org/awardwinners.