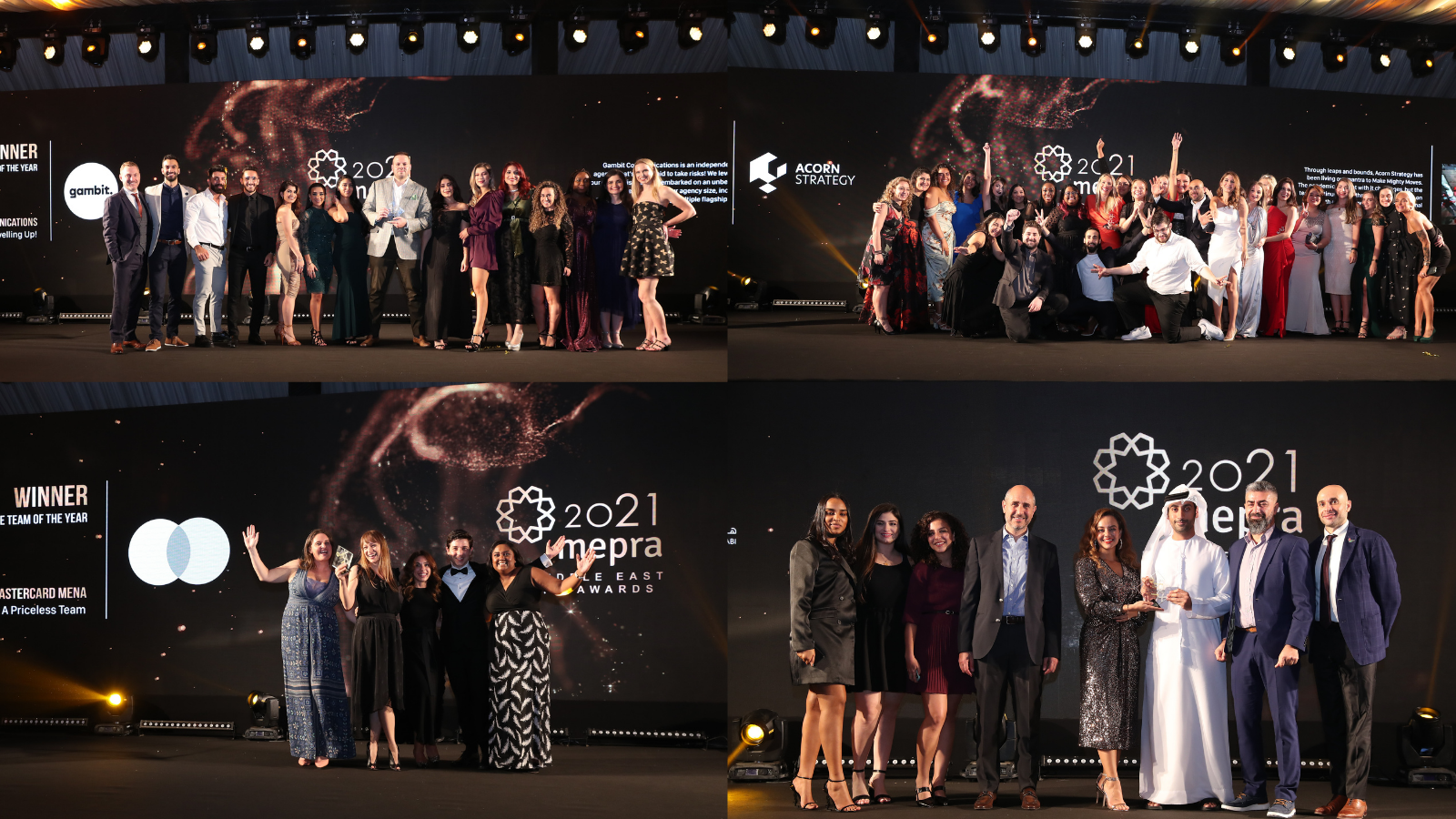 This year marked the 13th edition of the MEPRA Awards, which celebrates and recognises the most impactful and creative campaigns in the Middle East. The event, which also marked MEPRA’s 20th anniversary, saw winners awarded Gold, Silver or Bronze in each category during the black-tie gala at Atlantis, The Palm Dubai.

The Large In-House Team of the Year award went to the UAE Government Media Office while Mastercard MEA scooped the Small In-House Team of the Year Award, both first-time entrants for these prestigious categories. For the third year in a row, there was less than one percent difference between the winner and second place for Large Agency of the Year, with Acorn Strategy scoring 83.19% and Hill+Knowlton Strategies just behind them on 82.84%, demonstrating how competitive this coveted title is.

The biggest winners of the night were Weber Shandwick MENAT and Hill+Knowlton Strategies, with each scooping a colossal 24 awards to tie for most-awarded agency. Red Havas won four Gold Awards and one Bronze for their entry; Adidas Beyond the Surface, which was the most wins received for a campaign on the night together with Weber Shandwick MENAT & Google MENA who received three gold, one silver and one bronze for their campaign; The Google Cook-Off.

The People’s Choice Best Middle East Campaign Over the Last 20 Years, which was introduced to mark MEPRA’s 20th Anniversary, went to Weber Shandwick MENAT and Environment Agency Abu Dhabi (EAD) for their Vote Bu Tinah campaign. The category, which saw the public vote for the overall winner among the 10 finalists, recognised the most iconic, homegrown communication campaign, developed and executed in the region between 2001 and 2021.

The Chairman's Award, which was presented by Taryam Al Subaihi, MEPRA Chair, was awarded to Jack Pearce, co-founder of MEPRA and Founder of Matrix Public Relations in recognition for his outstanding contribution to the industry.

The Young Communicator of the Year Award went to Aliasgar Gulshan from Hill+Knowlton Strategies. Ali will be invited to join the MEPRA Youth Board to help shape MEPRA’s strategy and engagement with young communicators in the region.

A record 639 entries were assessed by a panel of more than 50 regional and international industry leaders to select the 2021 finalists and winners. The judging process was also reviewed by AMEC Chair and Co-Managing Partner atCARMA Richard Bagnall, who served as an independent adjudicator. Shortlisted entries were limited to 10 per category. For categories, which received a larger collection of entries, only the top 10 were shortlisted, even if the submission reached over the 70% scoring threshold.

"It’s been an absolute pleasure to chair the MEPRA Awards judging panel for the third time. Each year the entries are stronger, and I continue to be impressed by the creative and diverse communications work that’s being undertaken right across the region. AMEC stands for best practice in media intelligence, PR Measurement and communications evaluation so it’s very encouraging to see that so many companies entering the MEPRA awards tell a meaningful measurement story and evaluate their activity with credible and relevant metrics. Judging has been meticulous, fair and detailed with plenty of actionable feedback provided for entrants. My warm congratulations to all the winners!"

Taryam Al Subaihi, MEPRA Chair, judge and Director of Corporate Communications at EWEC, added: “It is encouraging to see more and more agencies and in-house communications departments recognising the value that MEPRA brings to the industry. This has continuously been demonstrated by the ever-growing number of award entrants. Most importantly, the caliber of campaigns that have been entered shows just how creative and vibrant the regional industry is. Agencies and in-house departments are pushing the boundaries in search of excellence - a trend we highly commend them for.”

To view the full list of winners, visit: www.mepra.org/awardwinners